In the few months Lottie has lived with us, her expressiveness, sensitivity and funny quirks have completely charmed me. Upon arrival from California, Lottie was frozen in fear for over a week. She barely ate and stayed hidden in a box with a blanket most of the time. After she started coming out to explore, she discovered freeze dried chicken treats and entertained us with her Chatty Cathy video debut. (I later realized she has only a few teeth and now crumble the treats, my bad.) There is so little we know about this precious kitty's former life. The shelter intake form said that she was an owner surrender, no reason given. We know she was shot with BBs at some point in her life. We know that she has cardiomyopathy, a heart condition that causes her heart to skip beats every so often. Lottie takes a beta-blocker and we hope it will not develop into anything more serious, however she will need regular echocardiograms to monitor her condition.

It's true that the adult cats we've given a home to have nearly all had some medical issues, some requiring dental surgeries and visits to veterinary specialists. Elgie has a hole in her heart and is on two medications twice a day. The cardiologist who saw Elgie was amazed by the size of the hole and that Elgie was doing so well otherwise. She is around 11 years old and has no there health issues. He commented about how resilient cats are and that dogs with this condition tend to faint. Cats hide their deficiencies, an innate trait based on surviving as a prey species for larger animals. But if we pay attention, we can tell if a kitty isn't feeling well by their body language and unusual behaviors that are not their normal. For instance, some cats like to nap in a cozy,  tucked away spot. Bootsie literally tunnels under covers and cat beds rather than sleep in them. But Elgie and Lottie both nap in "public" areas, where we can clearly see them; if they were hiding for a day then we would know that something is amiss. Neither girls run or play much, probably because they know they are slightly limited by their heart condition and they conserve their energy for important things like digestion.

With both of these heart conditions, sudden death is a possibility. In fact, I read that dogs with cardiomyopathy frequently go undiagnosed until they suddenly die. Certain dog breeds are more prone to this condition than others. Like most veterinary medicine, cardiomyopathy and its treatment is much more studied for dogs than for cats. It's reasonable to speculate that more dogs visit cardiologists than cats do, therefor there are more case studies. And of course some cats simply aren't candidates for visiting a cardiologist or ophthalmologist, because they are too far on the feral spectrum. We treat every cat as an individual and weigh the cost with the benefits. Thankfully both Elgie and Lottie are eating their pill pockets and not minding getting medication one bit. 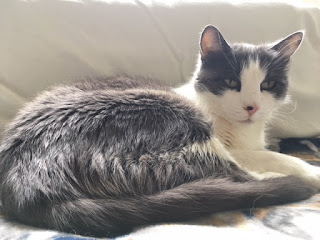 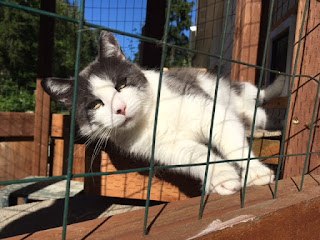