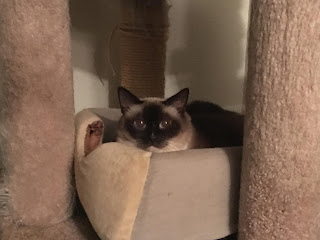 Sara is out newest resident to Flower Feline Sanctuary. This beautiful seal point Siamese was available for adoption at a large area shelter for several months after being surrendered from the same home our kitty Bunny lived in.  My guess is that the stress of confinement and lack of social engagement made Sara act unfriendly towards people and also given that she's 10 years old, potential adopters passed over her. Sara is clearly traumatized by her change in living situation and spends her days in a cupboard. She even eats her meals in the cupboard, which is fine because she is on a weight loss plan and this allows for strict portion control. At night she comes out to sit in a "safe spot" like the tall kitty condo in the photo above. She will accept treats but will not allow touching (yet). I am confident that taking the slow and steady approach will win Sara's heart eventually and she will tolerate (and enjoy) pets and brushing. I would love to be able to take some more photos of this gorgeous girl too. I will keep you all posted!

Email ThisBlogThis!Share to TwitterShare to FacebookShare to Pinterest
Labels: Typical day for the sanctuary kitties 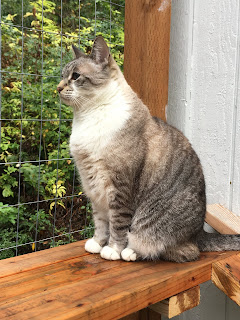 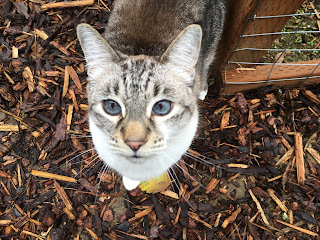 Handsome Riley has come to live at the sanctuary after spending 5 months in a shelter. He is a poor candidate for a barn home because he is an completely domesticated kitty who likely lived a strictly indoor life for his first nine years of life. Riley is a special needs kitty in that he becomes highly charged and gets over exuberant with any social exchanges and with other cats. He will hiss, growl, swat and possibly bite if people do not respect his limits and allow him to control the touching. He will not allow his nails to be trimmed and his veterinary exam (which I was not involved in) had to be undertaken while he was sedated. Sadly, his dominant attitude has not made him any feline friends.

Riley is physically healthy, has no special diet requirements and is very affectionate in his own way. Even though the mission of Flower Feline Sanctuary is not to rehome cats, I would love to place him in a "real" home if the right person or family appeared. He would need to be an only pet, not be allowed to freely roam outside, and not be around kids or anyone who cannot accurately read his behavior and appreciate his extreme sensitivity. Most people who understand cats to this extent already have multiple cats or a cat who needs to be an "only," so finding this fantasy home is probably like winning the lottery. But I am positing the possibility to the universe because truthfully, he creates some tension for the other cats. Riley can act like a jerk but he is also lovable and adorable. One person has speculated that Riley was probably raised as an only kitten and didn't develop proper feline social skills. He may have been abused or treated roughly. All we really know is that his guardian shrugged off responsibility and deposited him at a shelter, which fortunately is a no-kill facility. Every cat has a history we cannot know; all we can give them is some autonomy to be who they are (while being safe) while providing comfort and reassurance that we will always be there for them.