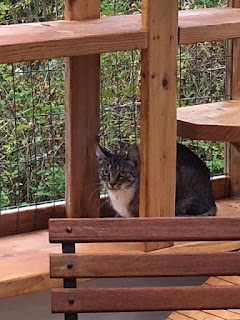 Our newest kitty, formerly Patsy but now named Grace, is a reminder that animals are all individuals and do not exist for another species' pleasure or profit. It was speculated that perhaps Grace was an abandoned domestic kitty who wandered into the feral site because she was hungry (she's only about 18 months old). But considering how feral Grace is, we now suspect she was born outside and stayed "under the radar" of the person feeding the feral colony. Grace is very quiet and likes and respects other cats, so she would never call attention to herself. She was however visibly pregnant and the experienced rescuer caught that on the wildlife camera photos of Grace, so she was humanely trapped ASAP. It's bittersweet when kittens are aborted using a spay surgery; that is the protocol of many high-volume S/N operations. In Grace's case however, given her small size and high stress level, I highly doubt the kittens would have survived for long. Giving birth and losing the babies one by one would have been even more traumatic. The feeding site sadly must be dismantled because of development in the area, so the rescue operation had to move quickly anyway.

Now Grace has as much nutritious food as she can eat in the hope that she will gain some weight and understand that she is safe and cared for here. She has started gazing at me without terror and we share slow blinks. I often talk to her in a calm manner to reassure her that, "It will be alright." Realistically, it may years before I can touch Grace and I may never be able to pick her up. Only time will tell if she was someone's kitten once, or if she has to start from scratch with trusting humans. Her wariness of strangers, both human and non, probably saved her life while she was on the streets. I strive to have no expectations of her, other than hoping to see her eating, relaxing in the sunshine, and using her litter box. No matter how much I want to pet Grace, it will only happen on her time frame. If we have to visit the veterinarian, she will likely need to be trapped again and that would set us back quite a bit. So we will worry about that if the need arises because right now, Grace has a clean bill of physical health - it is her emotional state we are working on.

A cat like Grace is not considered "adoptable" as a "pet." Indeed, in our culture feral cats make good "barn cats" and are taken in solely to keep rodent populations down for property owners. Some cats probably enjoy that lifestyle, but Grace is highly sensitive and her rescuer didn't think she would like that kind of life at all. Grace is in an individual; unfortunately we have to surmise to our best abilities what she likes or dislikes because she doesn't communicate in a language we readily understand. When I was growing up, our family answered an ad in the newspaper to take Lucy, a beagle whose owner did not want her because she was gun shy and wouldn't hunt with him. The man had no use for Lucy if she could not hunt. He could not recognize that she was individual and only wanted a dog who would help him with his bloodsport.

When we label animals because of the way they look, or their breed, we don't fully see them or know them. When someone purchases a dog or cat because they think XX breed is a status symbol or will make them look good, they are often disappointed to find that the animal has traits they never anticipated and cannot deal with. Each time a Hollywood film comes out with Dalmatians or chihuahuas for instance, these poor dogs end up in shelters in mass quantities months later. When you adopt from an animal shelter or a reputable rescue group, and find you cannot keep the dog or cat, they will take the animal back because they are invested in finding the perfect home for that animal. But how many breeders take an animal back after they have taken your money? If they saw animals as individuals, they wouldn't be breeding MORE animals. They would grasp that 2,000 dogs and cats dying EVERY DAY in animals shelters means 2,000 individuals, each one a unique little being deserving to live. To be clear, shelters are not the bad guys here - it's the folks who purchase an animal because they want a dog or cat with a specific look, never mind that they have no idea what his or her personality will be like. Or they don't want an adult animal, only a puppy or kitten will do.

What can we do, the folks who do care? Keep on adopting and speaking up for the underdogs and undercats. Keep trying to be the change. And think of Grace and all she's been through in her short life and be inspired to do more for kitties like her.
at September 07, 2019 No comments: